Thanks a lot. So I should create a snapshot first then I can move it with btrfs send ?

Specifically what I would like to do as a test would be to move one directory to my HDD with this technique aforementioned.

So the data I am copying is at this path

And I want to move it to the sdb drive.

so according to the path on the partition it would be

So would I enter

I dont seem to have a snapshot directory anywhere in the system though.

You can only use btrfs send|receive with entire subvolumes.

So if you want to do that, you would need to first create a subvolume, move the data into it and then mount it at /home/solomon/Documents/Tax. If that is the only folder you want a copy of, this is pretty reasonable.

However, if you want to use btrfs send|receive on arbitrary folders, it doesn’t really work that way.

As @dalto mentions, you need a subvolume to make a snapshot, and it needs to be a read-only snapshot to do btrfs send. Both source and destination need the same snapshot to do an incremental send (using -p option).

Note that btrfs snapshots are not recursive, i.e. it will exclude nested subvolumes (snapshots are also subvolumes). Instead of creating a directory you can create a subvolume and it’ll mostly behave like a directory, except you can snapshot it. For example:

And now you can snapshot it, and send/receive.

The snapshot can be anywhere on the same Btrfs filesystem, it doesn’t have to be in ~/Documents, that’s up to you. The flexibility can be confusing because there are many conventions. Likewise, the commands can be shortened, like I’m doing above, so long as they aren’t ambiguous. This is built-in, not special configuration needed. btrfs fi sh is the same as btrfs filesystem show and each user figures out their own shortening convention.

To do an incremental backup, first make some changes inside of Tax/, then:

Make more changes to Tax, do an incremental backup…

You can choose to keep or discard older snapshots, but you probably want to keep the most recent snapshot on both btrfs file sytsems, so that you can continue to do incremental backups. The cost is quite small, a couple hundred KiB of metadata plus whatever exclusive data is in the snapshot.

Let’s say you replace ~/Documents directory with a ~/Documents subvolume. And further say you’ve got LOT of stuff in ~/Documents, but it’s not changing much over time. This is a great use case for send/receive because Btrfs is already tracking the changes, so it doesn’t need to do deep traversal of either source or destination to know what files have chanced since the last snapshot.

Advanced:
You can see this in action with btrfs subvolume find-new - seeman btrfs subvolume and check out the find-new and list commands. Point the find-new command at the subvolume you’re actively using, but use the generation number from a previous snapshot of that subvolume. You’ll see a file listing of all files added/modified since the previous snapshot. This even works without snapshots, just use a lower generation number than the current value for the subvolume you’re looking at. Generations don’t represent a fixed amount of time, they can get updated quickly if the workload involves frequent fsync, otherwise the generation is incremented once every 30 seconds.

Right, thanks so im still trying to get a grasp on the concept of a subvolume

Is the subvolume created when make a snapshot or is it automatically setup this way by default when we opt for a btrfs file system on the hard drive. 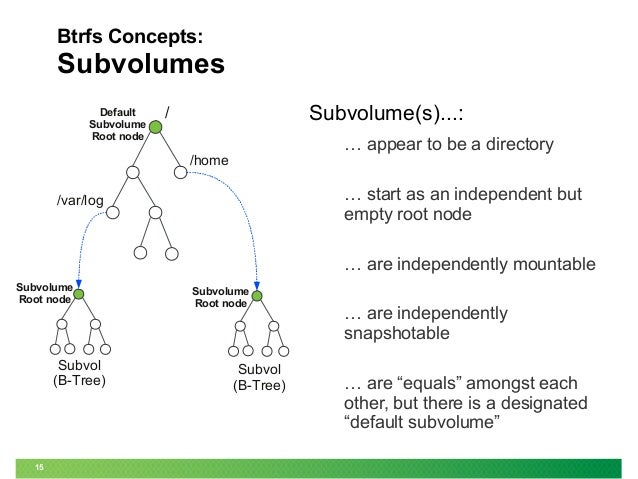 The installer does create some subvolumes. You can see them with:

That being said, you can create more if you want.

Is the subvolume created when make a snapshot

It depends what you mean. If you try to take a snapshot of something that isn’t currently a subvolume, it will not create one for you. However, snapshots are a type of subvolume so the question is somewhat hard to answer.

Thanks very much for the instructions. I now have a much better handle on how to execute this. I’ll let you know how I go but I decided I may as well backup the entire Documents directory as a snapshot backup as Dalto recommended, since it’s much faster this way

Although here is my concern, from my experience with timeshift which used snapshots I was unable to restore backups on two occasions and it was a huge data loss of important files.

I decided to avoid snapshots as i preffered to copy/duplicate/clone the raw files instead.

I’m not experienced with snapshots enough to trust them enough. Are snapshots compressed like zip or tar files?

Very scared to lose data again if I depend on the snapshot.

Okay so subvolume is the way the snapshot is organised when you extract it.

I should say the method of preference I had was more of a robocopy style without subvolumes, and without snapshots and rsync.

I think for my use case using the terminal to use copy command should be good for smaller directories, can this be done across different drives easily.

The issues I’m having are mentioned in this video hence my search for a Linux style robocopy. Sorry to reference windows but this method may be quicker for my use case, what do you think.

It is called rsync. I know you don’t believe us, but rsync is the Linux alternative of robocopy.

I’m converted…Im taking the plunge now into the world of rsync and will report back today how I went. Thanks for your patience

A subvolume is more than a directory but less than a file system. Btrfs gets the name from b-trees, which you can read about on Wikipedia and elsewhere, but Btrfs has many btrees: fs tree, chunk tree, device tree, uuid tree, extent tree, root tree. And files tree, which is what we call subvolumes and subvolume snapshots. You can make snapshots of snapshots. A snapshot is just a prepopulated subvolume. Subvolumes share all the other trees on a Btrfs file system.

Although here is my concern, from my experience with timeshift which used snapshots I was unable to restore backups on two occasions and it was a huge data loss of important files.

You can use regular tools like Nautilus (Files), Dolphin, ls and cp, to copy files out of your snapshots. So you should never be separated from your data.

Even if you use something like btrbk to help automate the creation of btrfs snaphots, and send/receive to another file system, you can still just navigate to the snapshot as if it’s a regular directory and copy files out. Including using rsync.

Okay I understand everything here

So we are creating a sub-volume here ?

It seems a bit tedious to start with taking snapshots of my Tax directory so instead I decided its easier to just backup to backup and copy the entire Documents directory.

This is what I have so far

So we are creating a sub-volume here ?

Thanks. Is there a GUI method to the btrfs snapshot?

Not sure whats happening here, i know its obvious just cant see it…

Ah I see it worked…!

So now I am cooking with gas, I will move the snapshot subvolume with aformentioned command

Although I get this response

Although I get this response

It is the spaces. You need to escape them.

ah yes thanks I should have known that

Do I need to specify a blank folder on the drive to remove this error:

Can we see the output of findmnt | grep solomon