Can't update in KDE on aarch64 in Parallels on M1 MBP

I can run updates in Gnome but I’m stuck at “Fetching Updates” within Discover. The blue line is about 90% and never progresses. I have an internet connection and the google speedtest gives me a speed of about 450Mbps in Firefox in KDE. 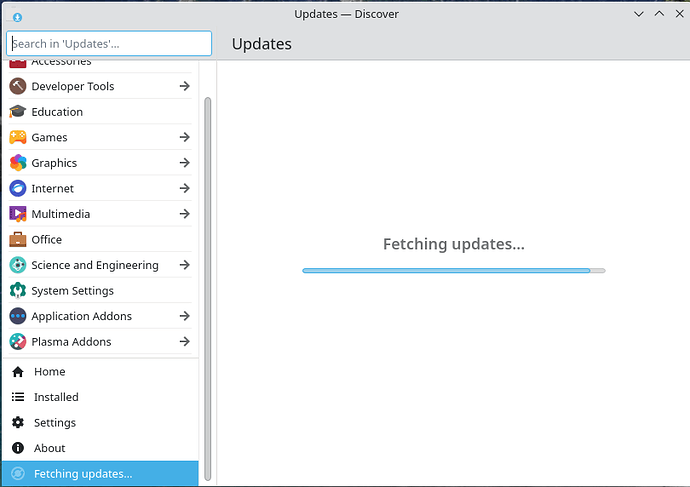 Discover can take a while to get and process all the package metadata. I noticed it was very slow on older hardware, but runs fine for me on newer, better resourced hardware. Are you able to increase the memory and/or vcpu for your vm guest?

I don’t think that makes any difference. I’ve let it sit overnight before with no result. But I just put it to 8GB of RAM and 6 processors and let it sit for almost 2 hours. This is the new screenshot and you can see there is little to no change from before. 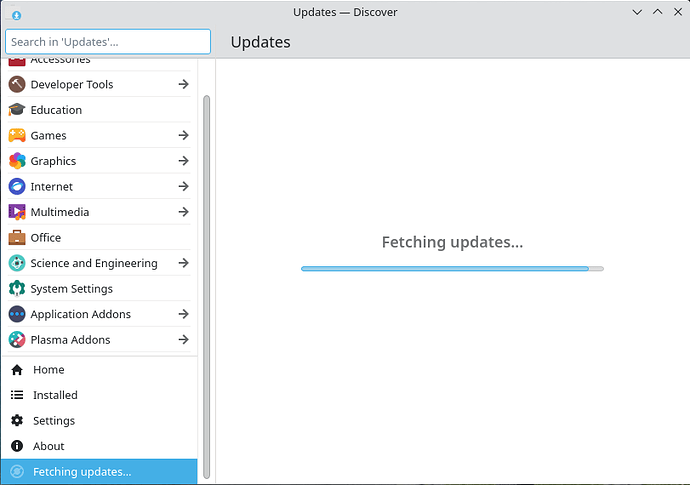 If you run journalctl -f in the background while it runs, do you see any clues about it failing to resolve software sources, etc.?

try with
pkcon refresh force
then restart and check if that solves the issue.

and then a reboot.

I don’t know what to look for so I don’t know if these starts and stops are related to your question. But here is the result of the command

This is the only line that’s obviously relevant and it looks normal to me.

Why would anyone even use KDE’s disKover, or Gnome’s software-center to update their system in the first place? They both drain resources with no end in sight and try to make Windows-Update seem like Cheetah running through the savannah.

I daily do this in terminal (regardless of my WM or DE):

About once a week, I do

It is the real cheetah, and it beats all beforementioned graphical software management systems by eons in time when it comes to updating your system!

Plus, searching for new packages to install may well be done through browsing the web, instead. Just search for the terms “Fedora” plus “package-name” or the type of software you are looking for.
It usually is much faster (and more precise), too.

Why would anyone even use KDE’s disKover, or Gnome’s software-center to update their system in the first place?

It’s a completely valid question, even if you have a different preference.

I wasn’t questioning the vailidity of the OP’s post. Just trying to give some hints on updating Fedora in a much, much quicker way.

I did try his commands in Konsole. But I still seem to have un-updated apps as the taskbar keeps telling me I have updates.
In regards to using the terminal. I’m a mild computer geek. I’m a RE Broker not a programmer. I’d like to get away from Mac, Chrome OS and Windows to something more secure. I think the only way to grow this Linux community is to be able to operate Linux desktop without the Terminal. Just as you can use the Terminal in Mac if you want to, but you don’t have do and can get done just about anything without ever using the Terminal. This is how Linux needs to operate. So I don’t argue that his Terminal commands may be faster, but due to their technical nature it’s not something Linux needs to be leaning on going forward if it wants to grow Linux past the Server community. 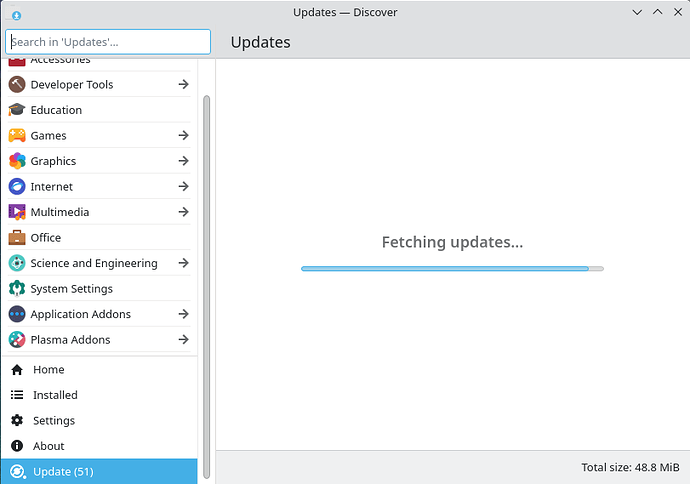 I agree with this sentiment, and apparent bugs such as this should be reported. It is likely that something may be not performing as it should and the lack of messages or info about where the hang is makes it almost impossible to track down.

Please report the bug at bugzilla.redhat.com.

For a work-around the use of the command line to do the update may allow finishing it properly, but this should not happen without some means for a gui user to know the actual cause.

I did try his commands in Konsole. But I still seem to have un-updated apps as the taskbar keeps telling me I have updates.

I happens, because Discover is still running in the background, before and after updating via terminal (konsole). You could set discover to not run on startup, or even delete it completely, which you probably won’t anyway… as per your ideological stance. Fedora certainly is following your logic to be a hastle-free point-and-click adventure.

But if you really want a more secure system, as you say, there will be no way around learning some terminal commands, and how the whole system operates beyond a GUI.

Just sayin’. Have a nice one!

Ivanhoe, I appreciate your attempts to resolve the problem but I think it would be more helpful for you to move on while the rest of us try to fix the issue.

did try his commands in Konsole. But I still seem to have un-updated apps as the taskbar keeps telling me I have updates.

no you have to restart system after updating with command line

Nah, you can do a pkcon refresh after. Generally, the GUI updates process dnf, flatpak, and fwupdmgr, and some of those (esp fwupdmgr) require a reboot, so it’s still possible to have real pending updates after a dnf update, but Discover has its own Metadata cache and may be out of date until the next packagekit refresh.