Dnfdragora-updater window to large for screen

Yes, I use/d Mate desktop and liked the updater too. The problem I experienced with it is, that it is quite slow. So i stopped to use it to apply the updates.

dnfdragora --help or dnfdragora-updater --help show the attributes it accepts

Indeed --qt is not listed in dnfdragora-updater --help

Thanks. Yes, I am aware of some of the command line commands and use them frequently; usually for “install” and “update”. I have also tried the --help switch with the same results as you. However, I would like to find out if the window sizing can be fixed. I can move it and adjust the width each way, but only a very small adjustment at the bottom is possible vertically. Also, with my favorite screen resolution (not highest), the window is too long at the bottom and the buttons (apply, select, quit) there are off screen.

I know the problem from my older laptop.

The upstream people are not available to change the program so as it should be. See comment on github link below ( anaselli commented on Jun 23).

I read through that a couple of time and I am not clear on what it all says. However, I think, in the end, it is saying that the issue is known, but no one has a fix for it yet.

but no one has a fix for it yet.

They not can find someone who was from the maker of the application. Dnfdragora is an app made by Mandriva in earlier times named Mandrake. They are not able to talk with the persons who made/manages it. They mostly know the app better and can much faster show what could be changed.
Then they release the changes and fedora makes new packages of the changed release.

This means upstream, when you use a opensource code/app from an other project: 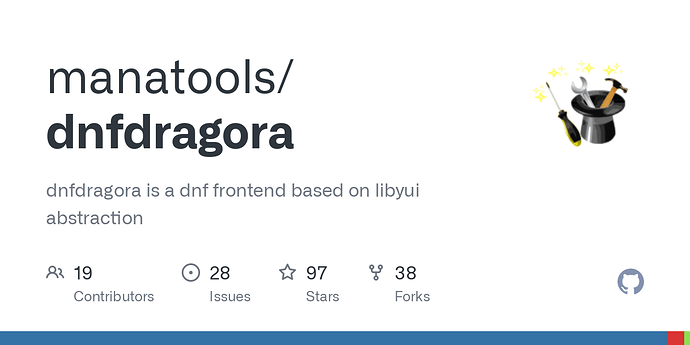 I tried dnfdragora once and did not like what it did so uninstalled it and have never looked at it again. While gui tools may look nice they do lock you into what the programmer thought was useful when it was written, and as can be seen may never get updated for improvements or bug fixes. If actively maintained they often improve over time.

I much prefer the flexibility of the command line access to dnf.