My thinkpad E520 runs fedora 27. When I boot the OS, I cannot login into the UI. But after the splash screen i get a list of Errors, where It sais “Failed to Start Process Core Dump” after several processes It tried to start. I took a picture: 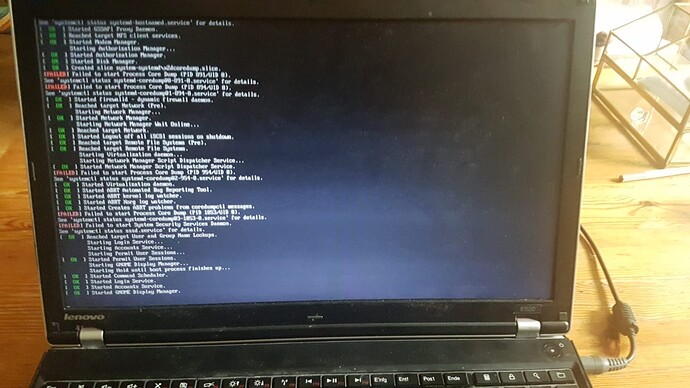 I still can login with a console via ctrl+alt+f2

Unfortunately, you are running a version of Fedora that went end-of-life back in 2018. I strongly recommend that you backup your machine and reinstall Fedora 36 on it, especially as it is meant to be a network connected machine as you’re attempting to run sssd on it. I suggest reporting back once you are on a currently supported version of Fedora.

I propose to login with a live ISO and make a backup of your data you really need. With Fedora27 you are way back behind (almost 10 Versions).

It is probably a good idea to make a new install. With the live ISO you can also check if your Laptop is still working as it should.

I still can login with a console via ctrl+alt+f2

Try to do that what @vwbusguy proposed while login with a console.

I used a live usb stick and installed the newest fedora. During installation I had a new problem, which I describe here.

A thinkpad and IoT?

IoT is one of the immutable spins and I would strongly suggest you try with the workstation install instead to see if the error is a result of the particular spin or hardware related.

I suspect that the problem is related to btrfs and that the subvolume mounted at / is named root so it somehow gets put into the initramfs that way and causes the error.