I fear stuff like this gets asked a lot but I could not find a solution by reading other post about this.

I am unable to get the nvida drivers running correctly. In particular on startup before I am logged into my destop I get the message “nvidia kernel module missing. Falling back to nouveau”. Moreover, I dont think that I am currently able to use my graphics card with nouveau.
For example my graphics card is not listed under “settings”: 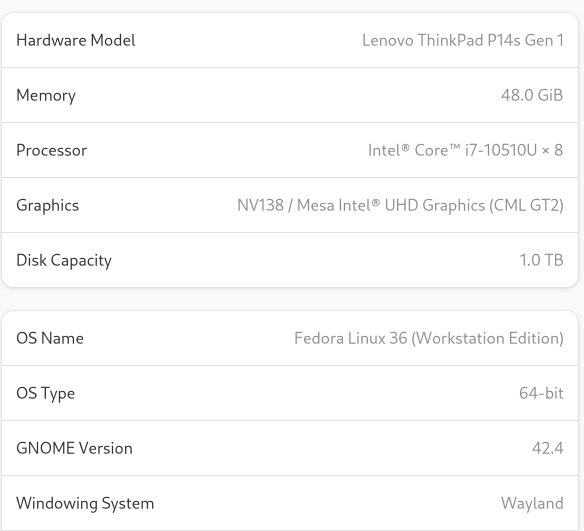 I tried to follow different guides and by now am quite unsure about the state I am in actually. But among the guides was https://rpmfusion.org/Howto/NVIDIA.

I will try to collect some information here:

shows that both packages are already installed.

I also found https://rpmfusion.org/Howto/Optimus but I did not unserstand what parts apply to me.

Please let me know what to check and what to try.

Have you typed/tried these lines of code to download nvidia ?

If you did could you type what is the output of nvidia-smi command ?

I did. Seems to be installed all just fine. nvidia-smi yields

Hmm, it could be a secure boot problem…but I am not sure. Is your secure boot enabled or not. Could you check it ? Also are you dual booting or just using Fedora ?

I am just using fedora. Secure boot can be checked in the BIOS?

If it is, here’s how you can set up the nvidia driver with it:

Ok it is enabled. I did not understand the guide you liked at first glance, But I will try it out later.
Ty.

Here’s the TL;DR (you’ll probably need to run these with sudo):

You can also just disable the secure boot (if you want to) from the UEFI menu and try to compile the nvidia modules again. But ofc thats is just an option. You can also follow the commands provided by Scott.

Yes. Put sudo before those two commands. Once you do this, you should be good to go with the nvidia drivers with secureboot enabled. I suggest rebooting after you run this to get the drivers loaded on boot up.

(you’ll probably need to run these with sudo):

Yes. Put sudo before those two commands. Once you do this, you should be good to go with the nvidia drivers with secureboot enabled. I suggest rebooting after you run this to get the drivers loaded on boot up.

(you’ll probably need to run these with sudo):

Now the drivers should be installed, signed, and should load and work.
To verify they are loaded properly, lsmod | grep nvidia should give you several lines output listing the modules that are loaded. If it does then the drivers are loaded and functional.

Ok the problem seemed to be the secure boot. I checked the README at /usr/share/doc/akmods/README.secureboot again and after that got it working. At least that is what I think.
nvidia-smi works now and lsmod | grep nvidia gives:

I did not reinstall the driver packages. Is there anything else that I could confirm?

At this point the kernel modules are loaded so the nvidia drivers are active.

I don’t think you need anything more unless you can identify a specific issue to discuss.

I was having this same problem with Fedora 36 after updating to kernel 5.19. Even after doing a full uninstall and re-install of akmod-nvidia I would still get the error message when booting “nvidia kernel module missing falling back to nouveau”.

Then rebooting and loading the key and entering my passphrase at boot, that totally resolved the issue for me.

It has been known for a long time that secure boot prevents loading unsigned kernels, modules, etc.

This issue is part of that, and I am glad you were able to find the solution.