Flatpaks can't seem to access most folders, including /home

I’m new to Fedora, and reasonably new to Linux, so forgive me if I ask something ignorant.

I’ve been running F37 for a few weeks now (switched from Mint), and recently I’ve ran into an issue with my flatpaks.
None of the flatpaks I install seem to be able to read/write to any directory besides it’s own. Even if I give it the correct permissions with Flatseal, it just won’t work.

For example Thunderbird. If I want to save an e-mail as text file (using a plugin), it doesn’t seem to matter where I want to save it, it will not work. Even the Documents or Download folder. If I want to open an .eml file on a drive, it will say that the file doesn’t exist. Permissions seem fine to me
I have the same issue with Obsidian. On the first screen after install, It can browse to my ‘vault’ on a mounted drive, but it won’t open the ‘vault’. The AppImage works fine.
I’ve tested this with a few ‘drawing’ apps to save a screenshot. Nothing worked. I get no error messages, nothing.
Apps I install as rpm work without issues.
Maybe unrelated, since I don’t know if it is a flatpak, but I’ve installed LCDproc for my keyboard, and it will not save the settings as well. It resets after every reboot.

I’ve been searching for a fix, and one of them suggested to move/delete the dconf folder in .cache. Besides resetting my Gnome settings, it didn’t change a thing.

I also run F37 on my laptop, and that all works fine.
Since I’ve ‘hopped’ from Mint on both devices, a difference during install was that I kept my /home folder from my mint install on the PC with the issues. Could that have messed some things up?

If you install the flatpak flatseal, you can give certain flatpaks access to the areas you want them to have.

If that isn’t working, can you share the permissions the flatpak has?

If you install the flatpak flatseal

This shoudl fix it if it’s about /home access:

Find and install hundreds of apps and games for Linux. Enjoy GIMP, GNU Octave, Spotify, Steam and many more!

Specifically, look under Files for the application and tweak it for the level of access you might want to give it: 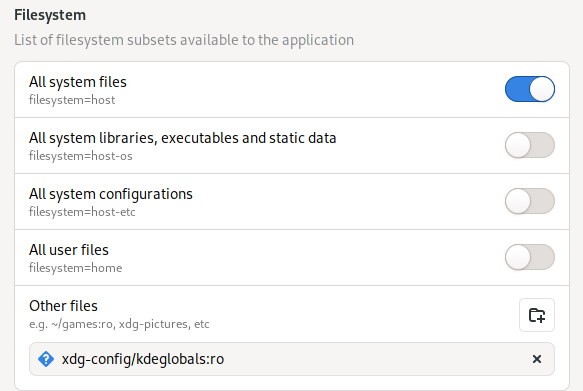 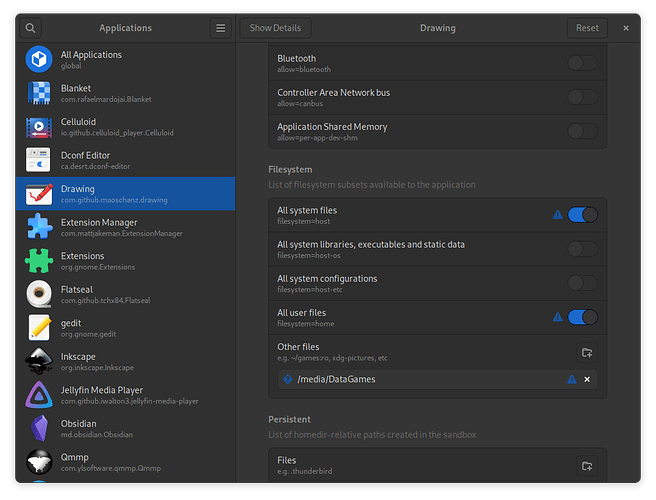 All these settings are identical to those on my laptop, and they work there.