Help, I'm dropping a lot of frames when watching Twitch

I’m struggling to understand why I am quickly dropping frames when watching Twitch. It happens both on Firefox or Chrome. See the 66 lost frames (i.e. “Images perdues”) in the screenshot, this is just after a few seconds of watching a Twitch stream: 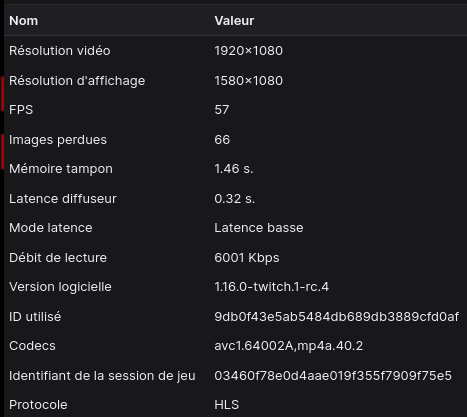 I did activate hardware acceleration following these howtos:

Everything seem to be configured properly. I run Fedora 37 (GNOME/Wayland) with an AMD RX 480 GPU and an AMD FX-8320 8-Core CPU. My 8 cores are all at ~10% usage (Chrome or Firefox), which seems suspicious if the video was indeed decoded with the GPU… I have a 500/500 Mbps internet connexion, through Wi-Fi so I get at least 100 Mbps and up to 300 Mbps (which is largely sufficient to handle the 6 Mbps Twitch streams).

Also, I tried the same experiment on my Dell XPS laptop (arguably less powerful), also through WiFi, and I get 0 dropped frames even after a few minutes of watching a stream.

Here’s the output of vainfo:

I think this issue is independent from the browser or the website, but the live nature of Twitch streams makes it more apparent. Most notably I get a lot of audio/video desync. If I keep the stream open for a few hours I can get several seconds between video and audio. And when the resolution is set to “auto”, it switches a lot between the various resolutions.

Am I missing something? Do you have the same issue?

I’m not sure if this page is up-to-date (page history show last revision = 2022-05-26), but it looks like the Radeon RX series cards are not yet fully-supported by the radeonsi driver.

You can see the additional columns for the newer cards here: 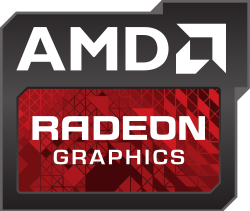 There is an interesting note here: 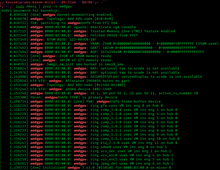 AMDgpu has been fully upstreamed and new developments continue to do so. As AMDgpu is part of the monolithic Linux kernel, it is shipped by most Linux distributions directly. The package suite / install script amdgpu-pro, distributed by AMD directly from AMD Radeon Software, ships an AMDgpu kernel module somewhat reliably more up-to-date compared to that of kernels shipped in regular operating system distributions.

Scratch that. I misread your output. On closer inspection, it looks like your card is actually part of the “Arctic Islands” series. It should be fully-supported.

is there a way to force the amdgpu driver instead of radeonsi? (both are in the Linux kernel, and from the Wikipedia page it seems that the RX 480 should be compatible with amdgpu, but it is still using radeonsi by default apparently).

I’m not sure that I’m reading it right, but from this chart:

It looks like the A.Islands cards use the amdgpu driver for 2D rendering and the radeonsi driver for 3D rendering (notice the Kernel/3D driver row).

This page appears to indicate that RPM Fusion’s ffmpeg package needs to be installed:

rpm -qi ffmpeg should work to verify what packager’s ffmpeg package you have installed.

Yeah… Between amdgpu and radeonsi and the various layers in the graphics stack, I’m a bit lost.

ffmpeg is installed too (though I don’t know if Firefox is actually using the ffmpeg installed on the system… it feels strange to depend on a binary and not a library, and that it’s not event recommended in the RPM package)

It’s easy to get lost when trying to configure hardware acceleration. I think it is largely because Linux is always trying to reverse-engineer things. The big companies with the

don’t have to do that. Instead, they pay the hardware manufacturers to make the device work the way they want.

The only things I can think of at this point is to make sure that you have RPM Fusion’s ffmpeg (as opposed to Fedora’s ffmpeg) installed (i.e. the @System version in the below output should not show ffmpeg-free).

And I think there were some reports that the Flatpak versions of various packages did not work because they could not access the required system libraries due to their sandboxing (i.e. you might want to make sure the below command doesn’t list Firefox on your system).

But this one should (i.e. it is the RPM version).

That’s all I can come up with. Sorry.

I have ffmpeg installed from RPM fusion, so everything seems fine from here too.

I think we (as in the Linux community) are missing tools to troubleshoot video hardware acceleration. To know if hardware acceleration is enabled and working with a tool actually testing the various video formats. That would reduce the amount of questions a user would ask when trying to figure that out.

I don’t know if it is even technically possible, but a top but for gpu would be awesome! This way we could see if, indeed, Firefox is trying to decode videos using hardware acceleration.

I’ve discovered System Monitoring Center which can give the GPU used in real-time. It helps to know if your GPU is being used when decoding video within Firefox!

It’s not yet perfect (like… it could be just some window manager’s compositing operations that would use the GPU and not the video decoding itself, but it seems to get more active when playing a video on Twitch)

glxgears is the only one that I’m really familiar with though.

So I made a bit more tests and I think the source of the issue is not whether hardware acceleration is enabled or not, but more that the entire rendering chain is rather unstable.

For instance, this is after around 30 minutes of watching Twitch: I lost 4267 frames, that is rather huge! 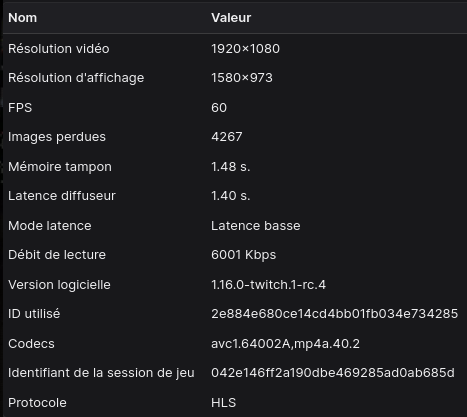 But when I look at the GPU tab in System Monitoring Center, I can clearly see that the GPU is used at around 10% and drops to 0% when I close Chrome: 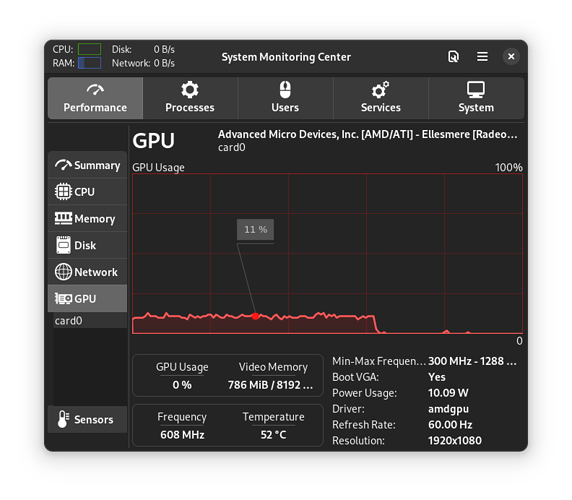 So in the end, I’d say that I do have hardware acceleration enabled on my machine, but something is happening somewhere in the rendering stack that makes it not as efficient as on other OSes, even if it is accelerated.

FYI, I just noticed this comment on the kernel test-day reports.

I wonder if that is the bug you’ve been hitting? If so, it might be fixed in the next kernel release.

The issue in the kernel test seems more serious, the user seems to fallback entirely to software rendering, and the screen resolution is smaller than it should be.

On my side, everything looks fine, it’s just with video playback that I encounter some issues, especially with Twitch where its live nature makes it more prone to lag issues.

When it comes to a top for the GPU, there is radeontop. (Not that I can explain what the numbers mean, but maybe you understand more.)

Simple, Twitch uses VP9 codec, and your hardware doesn’t support VP9 hardware accelerated decoding. You can use an extension such as H264ify to solve this problem.

Is there a way to:

I think vainfo should show you what codecs your video card supports.