How to automatically mount an encrypted volume at boot?

I have some LUKS-encrypted drives in use for backups. The ‘mount at system startup’ option in the Gnome disks app (configured for both ‘encryption’ and ‘mount’ options) doesn’t prompt for a password after logging in, thus the drive remains inaccessible until several manual steps have been completed in the said app after each reboot. 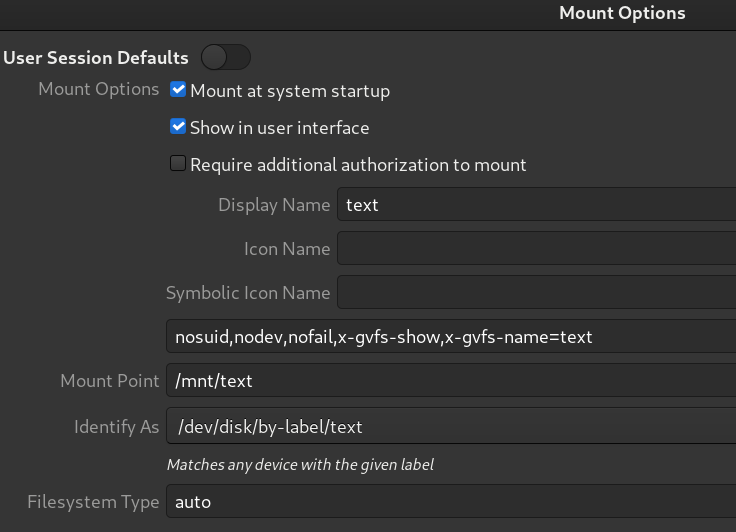 I only need the password prompt to appear when the desktop environment starts (better if several drives can be configured to be unlocked at once, provided that they use the same password). The passphare file should under no circumstances be stored on disk — I’m fine with typing the password manually at every boot (until I fully understand the security implications).

Someone else asked this same question yesterday:

How to automount encrypted external disk after login? Ask in English

Hi, I am just evaluating to switch my Desktop computer OS from Ubuntu 18.04 to Fedora 36. So far so good …

But now I am struggling to automount my LUKS encrypted external disk after login. I have no problem to mount manually by using File app Nautilus. In Ubuntu I was using the libpam-mount package. (sudo apt install libpam-mount). What is the procedure in Fedora 36? Thanks for a helping hand. kkarsten62

As for the multiple luks volumes, the way this is handles most commonly is to open one of them with your password and then store a keyfile(not your password) on that volume which opens the rest. Because the keyfile lives in an exncrypted filesystem, you can’t unlock the other volumes without first decrypting that one.

I see, I searched relatively thoroughly a couple of weeks ago.

I see, I searched relatively thoroughly a couple of weeks ago.

To be fair, that question hasn’t been answered yet so finding it wouldn’t have helped you much.

are internal and external drives any different in this context?

From a luks perspective, I don’t think it matters. Generally speaking, it is almost never harder to work with internal drives.

Yes - I asked the same question as @dalto mentioned.

I found for me a solution by using pam_mount, more or less the same procedure as I am doing with Ubuntu.

sudo dnf install pam_mount
reboot
sudo blkid
Find the right UUID of the encrypted disk you would like to automount after login.

Important additional note:
As said in the Ubuntu forums one of your passphrases of your LUKS encrypted disk must be the same then your login password! I did not check if this is also true for Fedora.

As I am new to Fedora can somebody confirm this procedure. Thanks.

Hello.
For myself I usually use this method:

This works for me and on Fedora 36 Kinoite, and on several other distro.
The decryption password will be requested at the boot stage, even before SDDM.