hi , i am trying to install vmware on my system . during the installation in gives me this error any idea how to fix it? 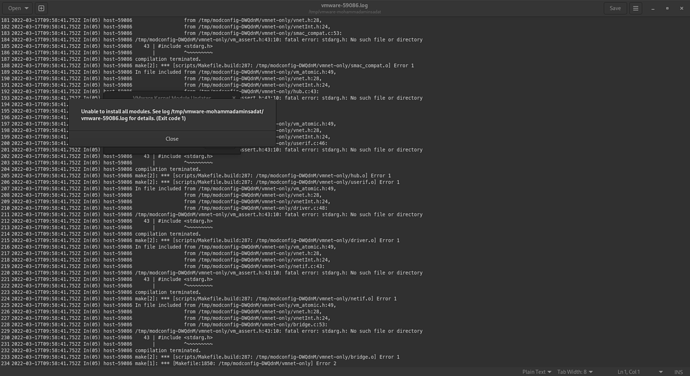 Hi @reza0314 , welcome to the forum. Please take a look at the introductory posts in the #start-here category if you’ve not had a chance to yet.

Can you please tell us what commands you’ve run? Are you following some sort of guide/readme? Could you link to it please?

I expect that means you need to install the kernel-headers package for your kernel.

i have installed them befor using these command

Hrm, not sure then. Sorry—you’ll have to wait for someone that has recently installed vmware.

i have installed them befor using these command

You also may get better results by doing sudo dnf remove kernel-devel followed by sudo dnf install kernel-devel. It is possible that a new install may get the headers needed to build your module.

reza0314, could you check your VMware’s version?

Hello!
I have a bash script by loungehostmaste from VMware community. But the are some errors:

I’ve checked stdarg.h. It dwells in /usr/lib/gcc/x86_64-redhat-linux/11/include/. But I don’t have any ideas how I can put the header into a scripts’s temporary directory.

Unfortunately I can’t connect to author.

Could you help me?

Obviously I’ve forgotten to remove the ‘vmware-host-modules’ before running my script. It provoked a fatal error for the git command.

So my problem was solved.

after installing kernel-devel …
… I found them in the “linux” subdirectory,

Just incase someone still got the problem. My solution was:

It seems strange to me that anyone hoping to build kernel modules would not know enough to do their research on requirements. You are installing an out-of-tree package and thus are required to meet the dependencies on your own. Packages that are built for use with fedora are usually in rpm or flatpak form and thus routinely install the needed dependencies for you. Out-of-tree packages do not.

Anything being built for the kernel must have kernel-devel and often kernel-headers installed.

This worked perfectly for me on Fedora 36.

Newbie here, after kernel 5.18.5-200 update this is not working anymore. Same old problem again. Can’t find matching headers and if they truly aren’t needed then someone please give a hint.

I just tried this with Fedora 36, VMPlayer v16.21.3 and got the player to load, but when starting a VM, it crashed saying something about vmmon.

“Could not open /dev/vmmon: No such file or directory. Please make sure that the kernel module ‘vmmon’ is loaded.”

I had the same error, but after restart it’s running without any errors…

I’ve tried rebooting and I think I’m giving up on VMware for now. I’m trying out Boxes.

Because VMWare is not free nor open source I never have tried it (and probably never will).

I hope boxes will meet your needs. I use QEMU/KVM and have been quite happy.