Is it safe to remove ntfs-3g?

Hai All,
Last night my fedora 35 received the new kernel 5.15.4, This kernel has new built feature to support natively NTFS file system. The question is, is it safe to remove ntfs-3g? because I;ve checked ntfs-3g still installed in my fedora 35 system. I just curious and want to know the new fitur linux kernel 5.14.5 is working.

Thanks You In Advance

NTFS-3G
GitHub - tuxera/ntfs-3g: NTFS-3G Safe Read/Write NTFS Driver is an open source implementation of Microsoft NTFS that includes read and write support. NTFS-3G developers use the FUSE file system to facilitate development and to help with portability.
If you don’t need ntfs support you may remove that. But you won’t be able to access ntfs file system.windows specific drives.

Yes of course I need this, because I use dual boot and my eksternal hdd use NTFS file system. The poin of my quesiion is, If there is built in ntfs support natively in linux kernel 5.15 LTS , is safe to remove ntfs-3g or it still need ntfs-3g installed in my system? so I can use the feature of the new kernel 5.15 LTS. I’m sorry with my bad English, I just curious is the new fitur really working in my fedora 35 system, I won’t messing up my fedora because i use it for my daily activities.

@afiadi
I also run 5.15.4-201 on F35. I was a bit curious as I didn’t hear anything about new NTFS features in the new kernel (which doesn’t mean much, because I hardly use NTFS :), so I have just removed my ntfs-3g and after that, I was no longer able to mount ntfs file systems (unknown file system). Thus, you still need ntfs-3g.

Nevertheless, I took a look at the kernel.org changelogs of kernels from 5.14.18 (my last one in Fedora) to Fedora’s current 5.15.4. There is nothing mentioned about NTFS changes, except one related bug that was fixed.

The kernel driver itself works ok, but everything else is a problem

Userspace part of the support is not yet fully ready. All mounting from GUI apps like Nautilus (GNOME) or Dolphin (KDE) and similar is done via UDisks which needs some more work to fully support the ntfs3 driver, see this upstream issue for details.

Naming the kernel module ntfs3 wasn’t the best decision. We now have two NTFS kernel modules: the old read-only one called ntfs and the shiny new one called ntfs3 (which might be renamed to ntfs in the future) and of course the FUSE implementation ntfs-3g. To add insult to the injury each of these three drivers support different mount options.

So for now, keep ntfs-3g and lets hope this will be resolved soon and ntfs-3g won’t be needed anymore.

Thanks for the detailed information @vtrefny

With ntfs-3g removed, it seems that mount is not (yet) able to identify the file system itself but with mount -t ntfs3 it indeed works.

In the past, when using ntfs-3g, each time I created a file or folder, it’s always belong to root and root group even though I created it with regular user. Now it’s belong to user and user group who’s create the file.

Thanks you very much all for your useful information and suggestion, but I still confuse, but I’m sorry I stiil confuse because I’m noob, I mean if i remove ntfs-3g my fedora system just works normally, without workaround to fix a problem if availaable?
Oke the other member mention it works, can you explain to me how it woks? what step I must do after i remove ntfs-3g driver so I can use anda access ntfs file system like I use ntfs-3g? can you provide valid link?

Thanks You in Advance

First of all, how usually you access the ntfs partition? Maybe from there we could figure out if this suitable with your current workflow on Fedora. 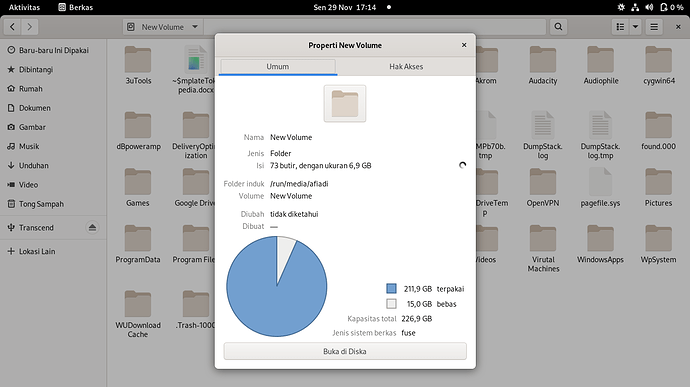 This is my external storage with ntfs format either 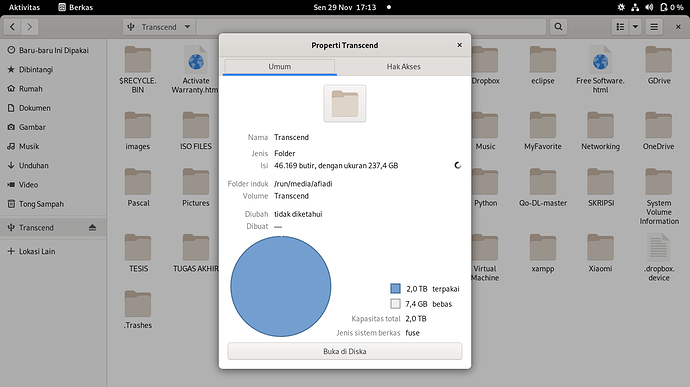 My sugesstion, keep using ntfs-3g. I’m just tested and found out nautilus (Fedora file manager) having trouble to mount ntfs without ntfs-3g (at least on my Fedora 35 with kernel 5.15.5). But it’s ok when mount it using the terminal.

@afiadi
As @vtrefny and @oprizal already suggested, stick with ntfs-3g - at least if you are not used to work in the terminal (and don’t want to for every ntfs-mount). ntfs-3g is well tested, is fully embedded in the GUIs and works stable with them. As long as you don’t need super fast data transfer rates with minimal resource consumption right away, there’s no reason to switch immediately.

An external storage (USB as I suspect?) will probably only be able to exploit the efficiency advantages to a very limited extent anyway