K3b Does not make iso

I’m trying to make a iSO file with K3b but when ever I do that I get the following error in the image. 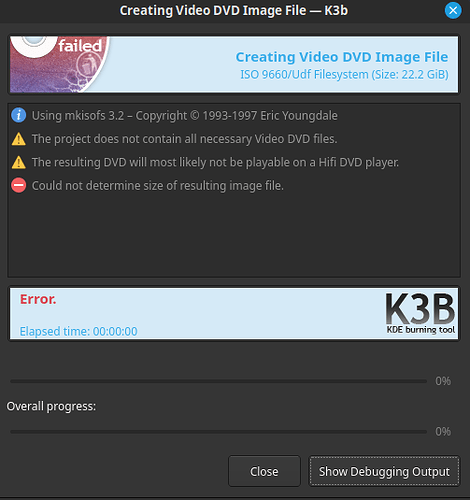 And the Debug output says:

That’s all I have at this point. Does anyone know whats wrong?

Some structure of a live system changed.
For example syslinux got removed.

Is it possible to make a custom ISO of Fedora 37? Ask in English

I’m having some issues making a custom ISO based on Fedora 37 with xorriso, mkisofs and (!) the livecd-tools. If I want to rebuild the ISO to include a kickstart-file on the ISO, and edit the grub.cfg to choose an install menu entry using the kickstart-file by default, I still need to pass on boot information to the program but I can’t for the life of me work out what that boot information is, given that Fedora 37 has done away with syslinux in preference to grub2 as a bootloader. When inspecti…

Edit:
Mine was more a guess while not have enough infos. So it looks like, as long as you not try to make a boot iso with F37 the above info can be ignored.

OK, but how do we fix that?

Your initial post is about k3b errors and the picture shows it is unable to make a video DVD with no video files. The message only says that it will not be playable on a DVD player.

K3b will easily create an iso image in data format. It appears you told it to create a video DVD image instead of a data DVD image.

What exactly are you intending to create?

Hi @computersavvy
Yes but that is what I was going for.
It’s a long story but That is what I am trying to do. Any idea how to fix this?

If creating a video DVD then you have to create the proper file structure and insert the proper files so k3b can build the iso from your project. K3b is smart enough to know what it needs and if you do not build the project properly then it tells you it is wrong.

Thanks but how do I fix the problem I’m having? I gave the debug above and I myself can’t make seance of it.

I don’t have your files so I cannot test. However I do see one thing in that image that stands out.

There is not a DVD in existence that will store that much data. A standard DVD hold 4.7 GiB and even a dual layer DVD can only hold <9 GiB. Only on a BluRay is that size possible.
That, combined with the errors of missing video files will need to be handled.

Since I do not do video DVDs I cannot assist with the needed files nor structure.

I’m not burning a disk (yet). I’m just trying to create the ISO for it but even that fails.

EDIT: Also I am using a blu-ray. I’ll be burning it with another software.

Update: I can make a data project iso but not a video iso.

Does anyone know what that’s about?