I am using Fedora 35 and there is a high disk write idling from [btrfs-transaction] in iotop (close to 1GB in couple of hours). I read some articles about an issue with btrfs fragmentation in kernel 5.16 but it is fixed in v5.16.5.
My current kernel version is 5.16.8-200.fc35.x86_64.
I set mount options for SSD and HDD to noatime and noautodefrag but issue is not solved. Do you have any suggestions?

Can you provide a few instances of cat /proc/$btrfs-transaction-pid/stack while the problem is happening? Just use up arrow and repeat the command a bunch of times, see what this process is up to.

Also note that autodefrag is not the default mount option so it isn’t necessary (or harmful) to use noautodefrag.

Image link: Imgur: The magic of the Internet
My drive setup is: / on SSD and /home on HDD - both btrfs. I have two btrfs-transaction processes so I assume one for / and one for /home. I take screenshot for only one process but both have same output.

Also I noticed SSD turn on/off noise every ~15-20 minutes and I think it is from non-stop disk write.

You could try fatrace to find the writer, it could be a bit verbose. You’ll need to mount the top level of the file system, e.g. as root

You could also use auditd.

It may also work if you go back 1000 generations and see what it’s writing a ton of. It does only show writes, not reads or deletes or renames, but new file writes to new or existing files.

Output from fatrace: Pastebin
Output from btrfs subvolume find-new (I checked last generation and -1 and they were same): Pastebin

So, it is somehow journal related I think but I don’t know exactly what.

What events are being logged? tracker-extract and tracker-miner seems busy but they are mostly doing reads.

It could be a tracker miner bug where it’s crashing on a particular file that’s confusing the extracter.

If it’s crashing, I think you can stop it by going to Settings->Search and toggling the switch at the top.

Yeah in the fatrace output, I’m seeing only one writer

So this suggests a user process is dumping events to journald. I’m not sure off hand if journalctl -f will show these events or if you need journalctl -f --user. But if something is crashing, the core dump is written to systemd-journald socket which would explain a lot of writes.

coredumpctl output with and without sudo is:

72M was total for /var/log/journal

When I do env TRACKER_DEBUG=config /usr/libexec/tracker-miner-fs-3 I get this message:

I followed instructions from Gnome Gitlab to run daemon manually.

Now when I do journalctl -f there are not infinite tracker starting loop logs but there are logs from rtkit-daemon and audit.

Hi, just want give my though. There lot process from your journalctl with 2645 pid process. May be you want to check what exactly this process (the id may be could be different for each boot, you need to check again with journalctl) with Gnome system monitor (on Utilities group if you’re using Gnome for easy read) or from terminal with top.

You could also use system monitor for general diagnosis by sort it by the (column) time, cpu, or memory. Maybe the obvious one is time if it happen start from the beginning of session till the end of session.

As I said, metadata tracker starting loop disappeared from journalctl. There is only one entry which is for systemd.
I still have high IO load. I don’t know what else to check.

If you believe it related to ~/.config, you can test it by creating new user to see if the problem also happen there.

There also some executable file inside /usr/libexec/ directory related to tracker (ls /usr/libexec | grep -E "tracker|miner"). You can run something like /usr/libexec/tracker-miner-fs-3 --help to see available options.

Gnome it self have the tracker to autostart located at /etc/xdg/autorstart/tracker-miner* in case you want to remove it from autostart for debuging.

I created a new user. Same load.
I disabled tracker with tracker3 daemon --terminate and I added Hidden=true in /etc/xdg/autorstart/tracker-miner* files. Rebooted. Same load and same entries for / and /home.

Edit: Maybe I found something unusual. When I checked for last 5 gen with btrfs subvolume find-new / <gen> there are many logs that something is written in /var/log/journal. But at the same time I opened journalctl -f and journalctl -f --user and there was nothing logged. Is it normal?

Your /var/log/journal/$machineid is 72M which is not very much. e.g. I’m using systemd.log_level=debug which is extremely verbose, I’ve got 2.79G in just 4 days. So I don’t think your problem is with journald logs unless you’ve customized journald. Also note that journald interlaces writes to its files, so you will see the same inode listed multiple times with different offset values indicating inserted writes. Also normal but makes it seem like there’s more being written than there probably is.

Web browsers do prolifically write to the disk with many small file writes.

When I checked for last 5 gen with btrfs subvolume find-new / <gen> there are many logs that something is written in /var/log/journal .

systemd-journald only writes to two journals at one time, a system and a user journal. It rotates them when they reach the prescribed size.

Maybe install bcc-tools and run sudo /usr/share/bcc/tools/filetop to find a writer. In my case I’m seeing cookies.sqlite-wal being hammered by Firefox all the time. If anyone can answer why writing cookies this much this often is that important…

There’s a bunch of other tracing tools in bcc-tools you can mess around with that might help, vfscount is a high-level overview one that shows create, read, write, and fsync.

This is “idle” as in, all I’m doing is typing in this browser window with maybe 10 other tabs.

Any snapshots being created or destroyed?

I have the same issue. I have a 2TB BTRFS filesystem, and when running any 5.16 kernel (I am currently on 5.16.8) the system load gradually increases over a period of 3-4 days until I have to reboot. The problem does not occur with 5.15 kernels. I have spent hours trying to pinpoint the responsible process but with no clear candidate. The btrfs-cleaner process does appear more prominently in iotop as the load increases, but it is not there continuously.

Can you post your mount options? mount | grep btrfs should do it. There was a bunch of refactoring with defragment code in the 5.16 kernel cycle that caught up autodefrag in this sort of behavior, and my advice is to remove the mount option temporarily. Some fixes are applied to 5.16.5 but I guess that’s not enough in all cases so I’ll circle back with developers and see if there’s more on the way.

Or if the workload is something other than desktop (web browser, email, small databases) then you may want to keep it off, because autodefrag isn’t intended for the very busy or large files use case. autodefrag detects small insertions and appends to files, and periodically dirties the entire file so it’s subject to being completely rewritten out, more or less just like duplicating it, thus defragmenting it.

This is the output from vfscount after 1-2 minutes: 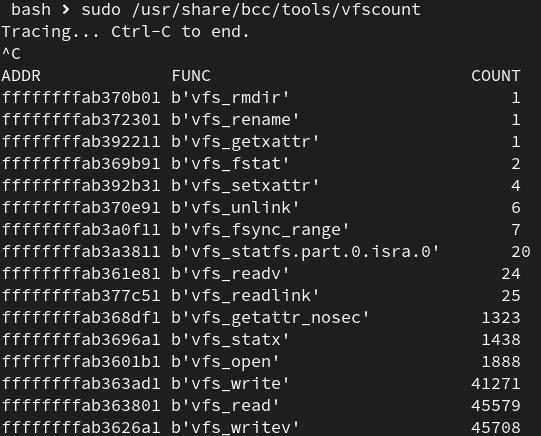 This is the output from vfsstat. Browser with 13 tabs. 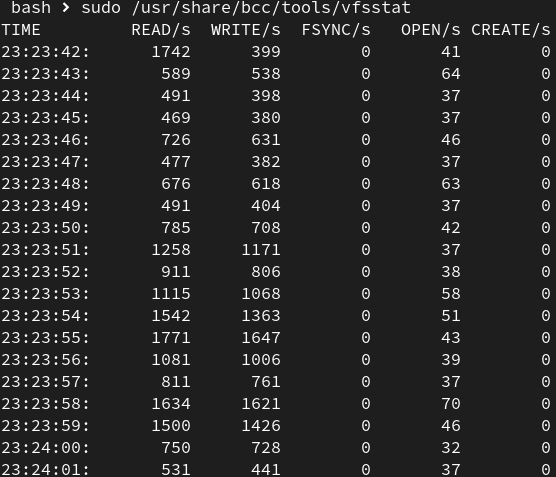 @johndoe5599 I see similar vfsstat, and an order magnitude larger vfs_read and vfs_write. I’ve got some flatpaks running (signal and element). Doesn’t look unusual to me.

@tbclark3 earlier question about current mount options is directed at you