Can you explain why combing different LVM caches is (not) possible/meaningful?

currently not possible, sadly because of some issue with Anaconda ).

Is that your bug report? Are you trying to stripe volumes and put your /boot/efi on them? That is the scenario in which I have seen the use for the 1mb biosboot. Also, are you using advanced partitioning blivet-gui

Can you explain why combing different LVM caches is (not) possible/meaningful?
computersavvy (Jeff V) November 27, 2021, 11:20pm #2

I looked at that bug report and have 2 suggestions.

In general raid 0 is not really reliable since a single device failure takes out the entire raid array, and there is at least one point of failure possible for each device used for striping. Raid 1 is better in that there are 2 devices for each mirrored pair and one failure does not destroy the entire file system.

Hi,
oh, sorry, my link to my bug report was probably ill-placed here. I apologise.
No, I did not attempt to generate /boot / /boot/efi as raid. Indeed, Anaconda was telling me about the biosbootpartitions independently of any specific configuration of the new partitions. I did not yet attempt using blivet-gui.

biosboot is created when a disk with gpt partition scheme is used to boot in BIOS mode.

Oh, wow, thanks for the hint. Sorry, do you have any link for further reading on how to boot the F35 installation media (USB device, in my case)?

Wiki is a start for me about the biosboot partition for me. 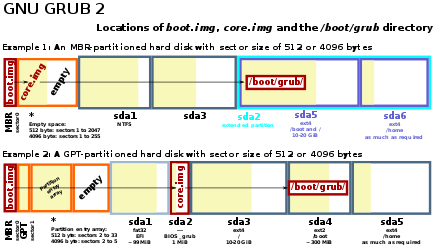 The BIOS boot partition is a partition on a data storage device that GNU GRUB uses on legacy BIOS-based personal computers in order to boot an operating system, when the actual boot device contains a GUID Partition Table (GPT). Such a layout is sometimes referred to as BIOS/GPT boot. A BIOS boot partition is needed on GPT-partitioned storage devices to hold the second stages of GRUB. On traditional MBR-partitioned devices, the disk sectors immediately following the first are usually unused, as ...

In order to boot Fedora installation media in UEFI mode:

thanks everybody here! this helped and solved my issue.