hello today i had my laptop in a case for about a hour when I was driving but for some reason the system didnt go to “sleep” when I closed the laptop screen,
as a result the laptop overheat a lot… when I reached to take it out of the case it was so hot that I could not touch it more then a second(i think it was about 100 internal, i didnt measure) , I let it cool down for a while but the system was still frozen on the locking screen, nothing response so I had to force shutdown using the powerkey.
luckly the laptop did boot and the system seems ok for now but it bothers me that the system let the laptop come to this situation.
on journalctl there was nothing regarding of overheating or critical temperature which is weird
here is my journalctl UNTITLED - Pastebin Service
how do I fix linux overheating protection?

On my systems overheating is blocked by the bios when it reaches the critical set temp and the CPU initiates an instant power off. It is possible that your laptop had not reached that temp yet.

The OS does not normally have to react to that temp since the CPU triggers the response. What the OS normally does is throttle the CPU speed as temps rise, but I think it relies on the the bios for the safety shutdown.

The real question you should be dealing with is why the laptop did not suspend and how to fix that, not why it did not shut down for high temps.

BTW, a fedora laptop cannot suspend unless you have manually created a proper swap file or partition so it can save what is in memory to a physical device. Fedora by default uses zram for swap so it does not create a physical swap device during install.

There is an indication of a problem in the log, the CPU is monitored by the kernel:

May be you’re a victim of a kernel problem where the battery is drained trying to go to the S0ix state. And there is only one way to get rid of battery power: heat.

Is it correct that a fedora laptop cannot suspend? Suspend is power off as much as possible except RAM. Without swap, hibernate where RAM contents is saved is impossible. And so is there no way to protect the RAM contents by hibernate after suspend when there is no battery power anymore to keep the RAM up.

Suspend and Hibernate/sleep are two different states.
Hibernate (sleep) the machine is still active with data in memory but the cpu idled for minimal power draw.
Suspend is data from memory written to physical swap and the system powered off.
When waking from suspend the system powers on and loads memory data from swap.
When waking from hibernation (sleep) the system merely continues where it was, since the data is already in memory.

No, it is not true the fedora laptop cannot suspend.
It is however true that before you can suspend the user needs to manually create a physical swap space since the default swap space is virtual and resides in RAM.

how do I fix linux overheating protection? 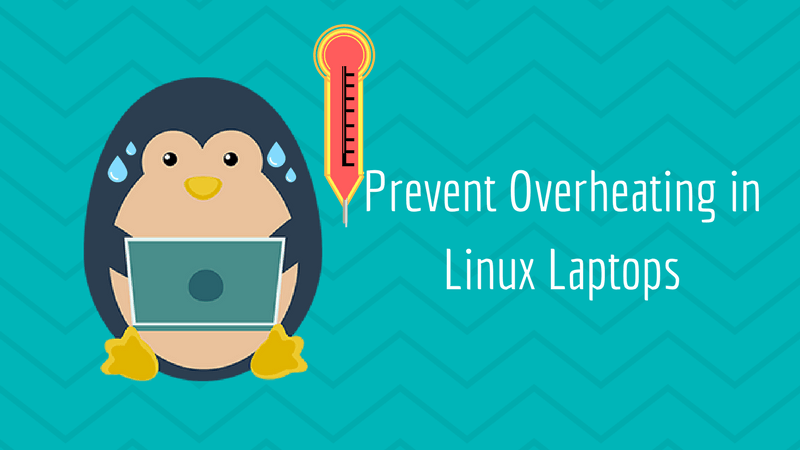 Most Effective Ways To Reduce Laptop Overheating In Linux - It's FOSS

Most effective tools and tricks that will guaranteed reduce the overheating in Linux laptops.

Hibernate (sleep) the machine is still active with data in memory but the cpu idled for minimal power draw.
Suspend is data from memory written to physical swap and the system powered off.

If it is possible for a fedora laptop to suspend, so what keeps fedora team from implementing this in the OS?
suspend isn’t new, and it is essential for every system

I installed thermald and it seems to work great, thanks. I wounder why it isnt included by default

AFAIK, suspend is “implemented in the OS”. However, a physical swap partition is not created during install by default. Why? A physical swap partition with default swappiness will be less performant than using ram for swap (fake swap) . This decision was likely first made back when disks were still “spinning rust” and the performance difference could be very noticeable. Where SATA SSDs existed, they had very little space. These days, with large, cheap SATA SSDs and NVMe drives, I think fedora should probably reevaluate the situation, and when an SSD or NVMe drive with sufficient space is available, create a real swap partition and turn the swappiness down. However, with the limited amount of (paid?) developers, the installer can’t know, or do, everything, and you can do this manually when you install, which is what i do, though not out of concern for suspend, which i very rarely use. I rarely even use my laptop, and when i do i typically shut it down when i’m not using it. I think suspend works on it, but it’s probably because i created a real swap partition when i installed.

By “included” do you mean “installed”, because it is in the repos, which is what i would consider “included”. Installing in the terminal is probably very quick. Maybe not as much if using something like gnome-software. Right now, i’m using a desktop computer with an AMD CPU, so i don’t need, nor want thermald installed on this computer.

Another major factor in the decision was, I believe, security.

Swap to a physical device, either SSD or HDD, leaves traces that can be forensically analyzed to find out what was done.
Swap to a virtual device in RAM however leaves no traces when power is removed.

This discussion seems to have gone OT since @itwrx posted to it, and @computersavvy answered.

What about opening another thread for these different issues?

(Not needing thermald and the like for whatever reasons surely seem very different from OP’s issue.)

i was just answering the op’s questions to the best of my ability to give them more context as to why things were the way they were. Not trying to change the subject, or start any new discussion (not complaining about the response which mentioned a reason i had forgotten about). Have a good one.