So i opened arduino ide and the menu bar is broken. I’ve never seen something like this before (in other distros. first time using arduino ide in fedora). by menu bar i mean those “buttons” like file,edit,view. i dont know the exact name or maybe it is called as menu bar. it is not missing but there is no text. any help? 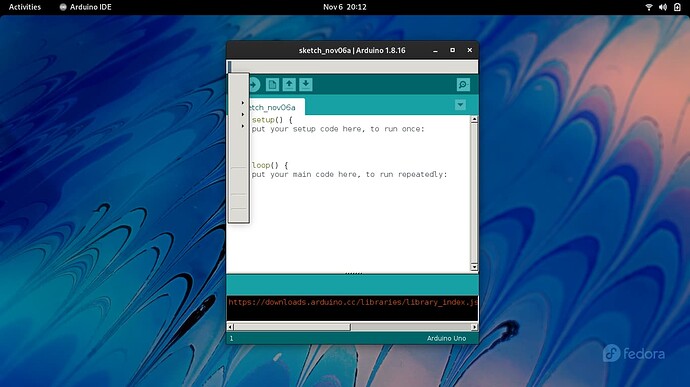 Have you tried x.11 instead the default Wayland session?

Take this in consideration too:

Hey guys, I’ve upgraded to Fedora 35 from Fedora 34 just now, and it seems the Arduino IDE (and SDK) has been removed from the repos. Is this correct? If that’s the case, does anybody know if there’s perhaps a COPR repo I could use? The only other way I know I could do, is use Flatpak, but that installation image is quite large, at over 400MB for just the Arduino IDE, which I think is a little much. Any word perhaps, whether it’ll shop up in the repos again, perhaps? Or is there like an offic…

The Arduino menu bar has disappeared and it appears this issue has been going on for at least 9 months without resolution.

I have tried several “fixes” that are suggested outside this format, but none are effective.

Is there an effective way to solve this problem. If I can’t use the Arduino IDE, I can’t use Fedora.