Moving Fedora to a similar machine

The three machines could run indifferently the same Ubuntus 20 to 22 or Fedora 36 or Mac OS El Capitan (but not more recent Mac OS) for years.

I am using now Fedora 37 on the 2011 MPB, with plenty of customization and additional software. This F37 was obtained by upgrading F36. (The Fedora 37 live installer fails on Macbook pros, this is a know problem, so I cannot test a fresh F37.)

My Fedora 37 does not boot on any of the other machines (2009, 2010, stopping at the GRUB shell). This is very annoying (for example, if the machine breaks, I cannot just move the SATA box to keep working).

Is there something in F37 preventing machine change? I am thinking of some nasty Mac style lock-yourself-out security feature.

I did something special on the F37 (before noticing the problem): dracut --force --no-hostonly but I think this should make it more portable (not less).

Can somebody report on moving F37 to a another similar machine (using EFI boot)? 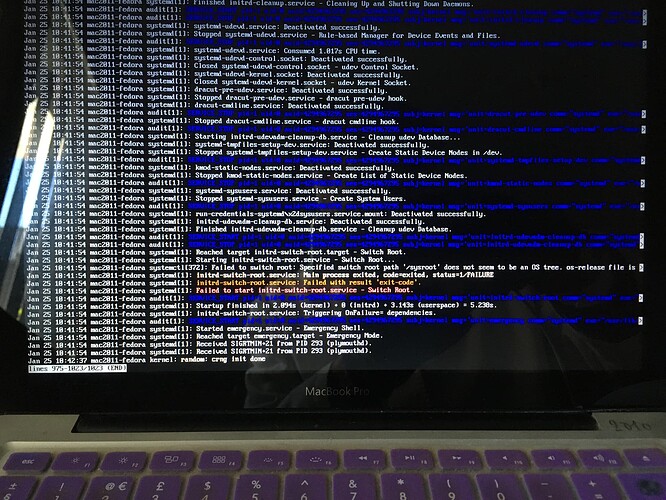 I have not tried a macbook, but have seen several notes about installing 36 then upgrading to 37 usually works, but directly installing 37 may not. It seems the installer for 37 may have an issue with installing on a macbook.

Yes that is a known problem which aggravates my case.

Could my problem be related to SE linux? /etc/selinux/config are same in F36 and F37 so maybe not.

The same Manjaro runs on the three machines (kernel 6-1-1). Something is broken in F37.