New install can't boot after upgrading from 36 to 37

This week I installed Fedora 36 in dual boot on my desktop computer. (I used 36 because 37 wouldn’t boot from the live install USB stick, probably because of this?)

F36 worked fine, so I wanted to upgrade to 37. The installation completed but now I can’t boot. I see GRUB, then select Fedora and then I get a black screen.

I tried Ctrl+Alt+F1 but it doesn’t work: The screen stays black.

I know I could just reinstall Fedora, but I’d like to learn how to troubleshoot these kind of issues. (I’m fairly capable in Linux but not in boot stuff). Any help is welcomed!

Does it boot when you pick an older kernel in GRUB? What if select your Intel GPU as the primary GPU in BIOS, does that help?

Desktop machine, with the system trying to load the i915 driver but you said you have an nvidia 1060 GPU.

Does your motherboard have onboard video as well as the nvidia GPU card?
If so then it seems it may be trying to use the intel GPU and since it cannot (either due to bios settings or no monitor attached) it errors there.

Not sure if it’s relevant but one of the thing I did prior to my not-booting issue is to install the nvidia drivers. It didn’t work and there was some warning about EFI or Secure Boot (i don’t remember) so I uninstalled it.

This sounds like the problem many had with nvidia and kernels 6.1.5 & 6.1.6 when using nvidia and encryption. The black screen prevented seeing the password prompt on the screen though they could still continue the boot by entering the password and pressing enter. That seems to have been resolved by kernel 6.1.7.

Are you using encryption? What kernel is presently installed?
How did you “uninstall” the nvidia drivers? It sounds as if the modules were not fully removed, which is why I ask this question.

To do a clean uninstall of the nvidia drivers (when installed from rpmfusion) I recommend
sudo dnf remove '*nvidia*' --exclude=nvidia-gpu-firmware which does remove everything related but leaves the necessary firmware package for the nvidia GPU.

Nvidia drivers initially will not load due to secure boot enabled. They have to be signed if you wish to use secure boot and how to do that is here.
https://rpmfusion.org/Howto/Secure%20Boot?highlight=(\bCategoryHowto\b)

How did you install the nvidia drivers? It should have been done as noted by @vgaetera above if you planned to do updates to your system without manually reinstalling the nvidia drivers. If installed from rpmfusion then the method above will automatically sign the newly built modules for each update.

I must note though, that for modules already installed they will not be signed unless removed and reinstalled. New updates to the kernel will get the signed modules automatically.

If the nvidia drivers were installed directly from the nvidia site then the removal and signing methods are different.

Does it boot when you pick an older kernel in GRUB?

No, they all fail at the same step, even the one called 0-rescue.

What if select your Intel GPU as the primary GPU in BIOS, does that help?

I don’t seem to have this option.

Does your motherboard have onboard video as well as the nvidia GPU card?

Yes, but the HDMI port is unaccessible (blocked by plastic built into the case). I could possibly try to break that plastic if you really think this is the only way, but I would prefer to keep the case in its original state

Are you using encryption?

I don’t know. What kind of encryption do you mean? How would I verify? My SSD is not encrypted and neither is my home partition, if that’s what you meant.

What kernel is presently installed? 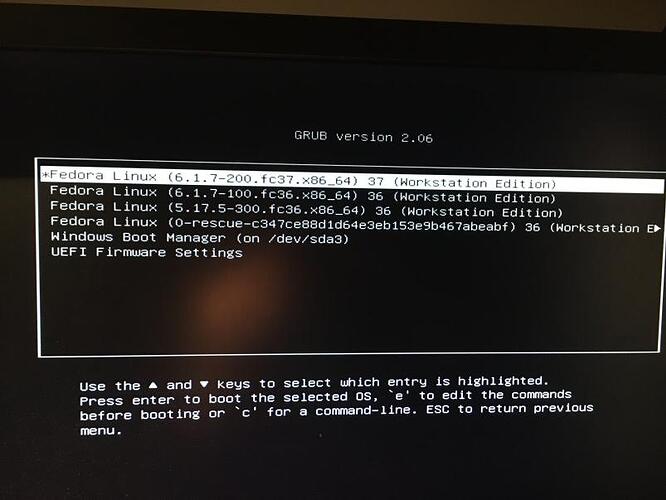 I tried them all and none have worked.

How did you “uninstall” the nvidia drivers?

I installed using the Software app. At the bottom, there’s a Drivers section and there was 2 nvidia drivers available. I’m not entirely sure, I think I installed the first one, then the second one. The later gave me an error and I realized it was just an older version so I ignored it. (it didn’t installed)
I vaguely remember seeing some error, so I just uninstalled the driver also using the graphical Software app.

To do a clean uninstall of the nvidia drivers (when installed from rpmfusion) I recommend
sudo dnf remove '*nvidia*' --exclude=nvidia-gpu-firmware which does remove everything related but leaves the necessary firmware package for the nvidia GPU.

I would like to try that, but right now I can’t boot so I don’t know how to reach a terminal

Any tips for me to reach a terminal?

In case it useful, here’s where it stops during boot: 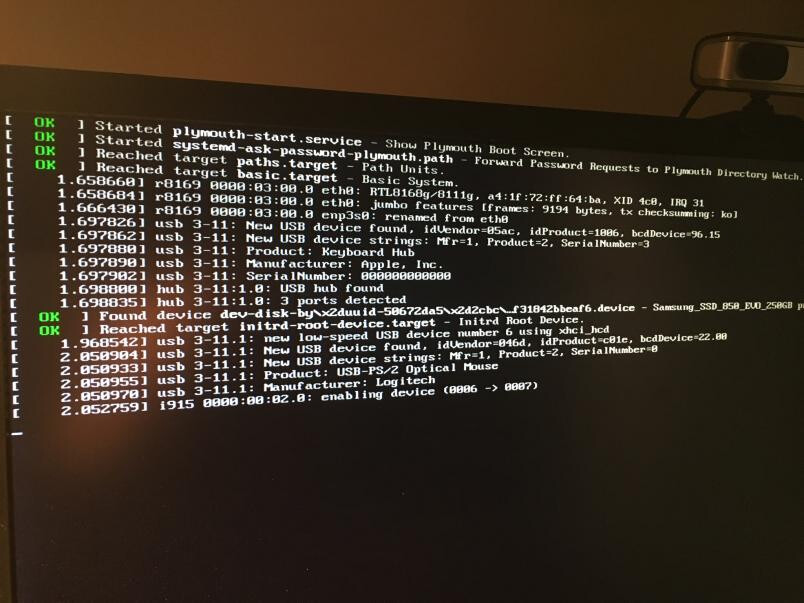 And here are the GRUB commands for the first entry in the GRUB menu: 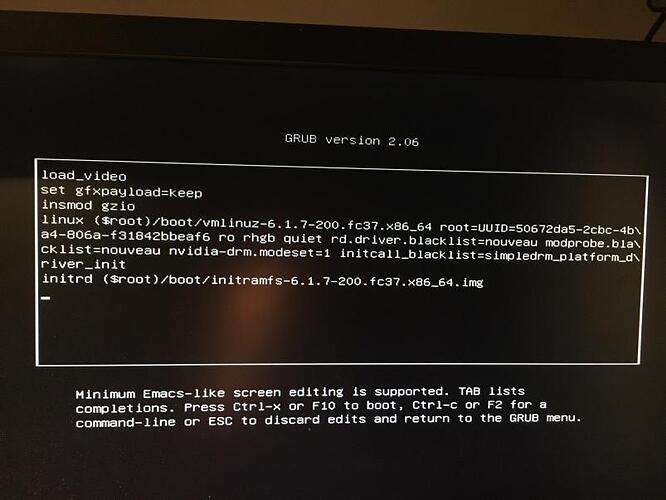