HEIC images are not supported in Fedora without extra tweaks. But libheif doesn’t help either (tried several image viewers including eog, gThumb etc).
However GIMP mange to load it successfully after installing gimp-heif-plugin. But usual image viewers fails to open this format.

Did you see Trouble opening heic image format on Fedora 36?

@augenauf Hi, Thanks for the reply. I have already installed the package qt-heif-image-plugin-0.3.3-7.fc37.x86_64. Sadly it does not make a difference. I tried opening heic files with gpicview. But the viewer quits unexpectedly.

Turns out this is a issue with libheif-1.14.0; libheif-1.13.0 works without issues. Loading is slow though.

the app and its dependency seem to be having trouble on my Fedora 37 install. Keeps crashing and burns images onto the screen…

I wonder if your having any issues too?

I am running the image viewer app for HEIC

I followed the prompts but couldnt get the bug to go into the reporting with bugzilla,

At least I dont think so. I cannot see it listed in “mybugs” 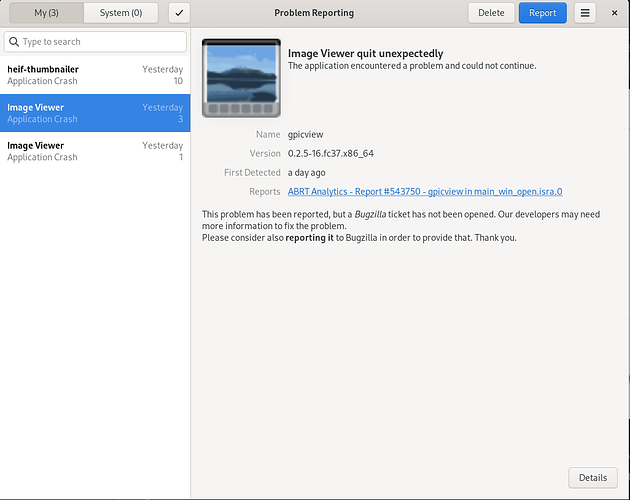 After installing libheif and qt-heif-image-plugin all programs except darktable show heic images: perviews in Dolphine, Gwenview, Gimp,…
The Flathub version of Darktable shows heic images - but I possible I’d like to use the native package.
I tried with a rebuilt source RPM version (activating “BuildRequires: libheif-devel >= 1.9.0”) and with a version built directly from the git source - still Darktable does not show heic images… I am not 100% sure I did everything correct, but to me the build process seemed to work.

@nirvana as Linux and Fedora newbee - I tried downgrading libheif to 1.13 via dnfdragora, but this did not change anything for Darktable eather.

To me it seems like this is not a general libheif problem as other programs are able to work with heic images. As well it does not seems to be a general problem in Darktable 4.2 on Fedora as the Flathub version works.

As I just started to use Fedora I don’t know if heic images worked on Fedora 36 or with previous versions of Darktable.

Any ideas how to get heic support activated in darktable? Or is the recommended way on Fedora to use the Flathub version?