I have been trying to get the WiFi to work after installing Fedora 37. It worked perfect from the flash drive. But quit immediately after all the updates installed. Wouldn’t even show I had WiFi as an option in the settings/connections. After a lot of searching I found this thread (WiFi stopped working after update, how to rollback?).

I followed your advice and did this: 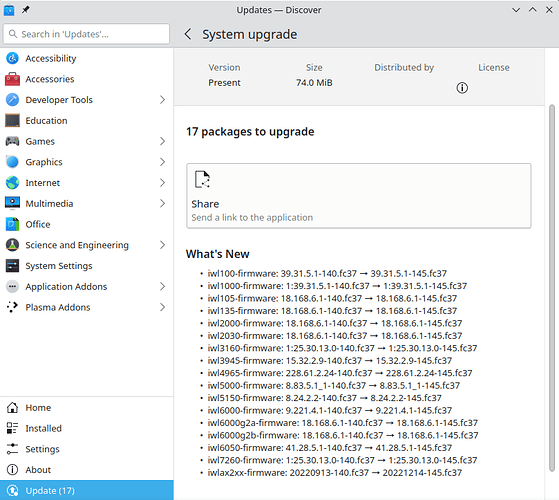 Thank you very much!

Hi @wjoel , welcome to the community!

One can use the dnf version-lock plugin to prevent dnf from upgrading packages:

I don’t think using an older firmware would cause an issue, but one will manually need to check from time to time if a new firmware version has fixed the issue.

Thank you very much! I greatly appreciate it. Would the dnf version-lock plugin prevent all packages from updating or does it only lock certain packages?

If it’s for all packages, can I still allow the updates so the packages which should be updated can be and then run the

command to roll back only the WiFi firmware?

Thank you very much! I greatly appreciate it. Would the dnf version-lock plugin prevent all packages from updating or does it only lock certain packages?

You specify which package you want to “lock”.

Yes, you can always use the downgrade command to install an older version of a package—the oldest one you’ll have access to is the one in the fedora repo—which is the version of the package at the time of the Fedora release.

Awesome, thank you for the help Ankur Sinha!