Why does DNF update fail so often? 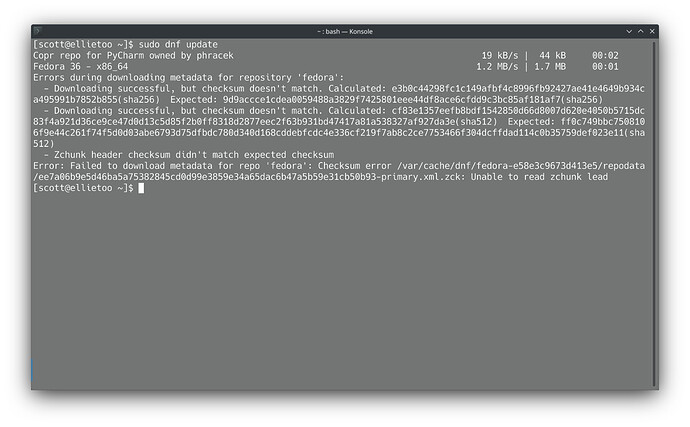 Could you please tell more about your installation. I just see that you use F36.
How did you install it? New install or update ?
How does your /etc/dnf/dnf.conf look like?

For the beginning do an sudo dnf update --refresh and tell if after --refresh you also get such error messages.

This stuff happens about once a month, and it’s very frustrating

I’d be interested in hearing details of previous problems you saw. This sort of thing is pretty out of the ordinary in my experence. I’d say something like this might happen once every 3-4 years or so…

Not much to say really once a month or so (guesstimate) I run into similar problems. I get an error message when doing an update. It usually pertains to some sort of metadata issue.

It’s still infrequent, though. And it typically gets corrected within a few hours. I’ve only bothered to report these a few times.

It happened again today. Oddly enough I was able to update via packagekit.

In the past I read that some network providers use some sort of transparent proxy and they don’t work very well with zchunk.
Maybe it is your case.

I’ve never* had this experience you’re having with checksum mismatches, and I suspect that’s the case with most. My best guess is that your local network connection or hardware is the issue, nothing software related. I don’t suppose you can experiment there, changing the cable if a wired connection, or port, or switching from wired to wireless, or wireless to wired, to check the layer 1 dimension to this issue?

*well, never is a long time. Let me more accurately say that I’ve perhaps had 1-2 issues with a checksum mismatch over multiple cheap refurbished servers and workstations over the past 20+ years.

Both my connection and hardware are fine.

When this occurred 3 days ago, I reported it to Fedora Infrastructure, and they confirmed it was a problem and fixed it within a few hours. I reopened that ticket today,

I reopened the ticket with Fedora Infrastructure, and as of this writing, they’re working on it.

I haven’t in a while, but when I did it was when I was administering Fedora boxes on a shoddy network that had frequent packet drops. It’s definitely not been a normal circumstance when I’ve seen it.

OK, fastestmirror=True in my /etc/dnf/dnf.conf file was the culprit. I got some bad advice a while back and had added it. I’ve now removed it, and (naturally) I’m no longer having problems.