Your VM’s are hosted in HDD or SSD?
Chipset Q35 or i440FX?
In NIC you use Bridge device?
How many GB for disk image?
I’m seeing that you don’t use virtio, what is behind using virtio then?

Your VM’s are hosted in HDD or SSD?

On my laptop where I just installed a win11 VM it is of course the nvme drive.
On my desktop I use HDD for all but the host OS.

My NIC for the VM is bridged to the virbr0 device on the host and gets its IP via dhcp from the host.
I usually use 20 to 40GB for the disk image, but that is dependent upon the needs of the VM. Some need more some not so much.

Chipset Q35 on all

Each setting is dependent upon the usage and user choice. Some software works well with one setting and some works better with a different setting so often it may become trial and error to see what works best for your needs

You can of course create your own bridge device on the host attached to a physical NIC and use that for the VM if you choose.

Currently I have dual boot and if a VM runs as efficient with KVM/libvirt/qemu I think I could remove this dual boot system and install windows 11 as a VM on my other SSD partition where I currently have Windows host installation.

What had me tied to this system is that my VMs were very inefficient with VBox, not to mention Windows VMs, Linux VMs distros ran “acceptable”.

if a VM runs as efficient with KVM/libvirt/qemu

You’ll want to make sure you install the virt guest drivers. There’s in an option to mount the Windows drivers as a CD from ISO. They’re a bit of a pain to install, but you only have to do it once (Right-click and Install on each one in different folders). Once that’s in place you should have good device and I/O integration between the Linux host and the Windows guest.

If you prefer you can also get them from the git repo: 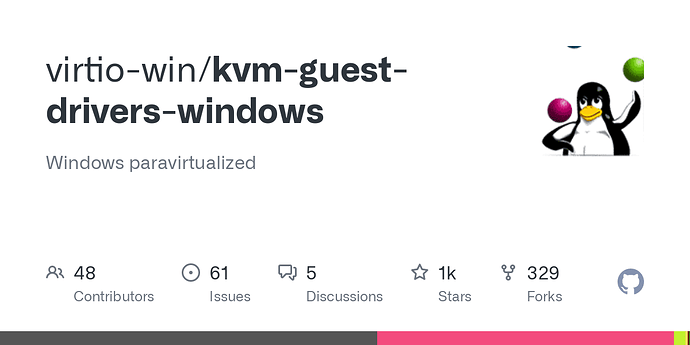 Windows paravirtualized . Contribute to virtio-win/kvm-guest-drivers-windows development by creating an account on GitHub.

Or you can mount them from the Fedora host system:

My install and config was only about 30 minutes start to finish on the win11 VM on my laptop with the nvme drive. Took more time to update windows 10 on my dual boot desktop system (HDD only).

I also tested again with the VM set to QXL instead of Virtio and quickly reverted to the virtio setting. Not as stable graphics on QXL.

Ok, I just installed win11 in my nvme device and I just have to say something… WOW!

I could swear that it took a maximum of 25 minutes when I was already inside Windows.

I’m beginning to see that the problem here is my HDD device, I always hear my HDD turn on and off, it goes into a kind of idle mode.

How can I get more out of my HDD? that it enters a state of rest is already a limitation in performance.

Some HDDs are configured by their bios to power off when idle, others can be set by the OS to do the same or remain powered on. Constantly powering down is certainly a time delay with the start & stops.

Using a HDD that is USB connected will also add time because of the data transfer rate limitations.

My laptop was delivered with win8 installed and I immediately converted it to dual boot, but seldom boot windows. I tested the win11 VM on the linux host that I had booted there.

If you are using an external drive you should consider either connecting it as USB C at the port in the back or at least as USB 3 to one of the other usb ports. You should also consider using an SSD for the external device to avoid the significant data read/write speed differences on the HDD.

I know of no way to increase performance on an HDD. There may be some ways to improve the data transfer though. If it currently only has a usb2 connection then upgrading that to usb3 should be an improvement. Improving it to usb-C should also be another step improvement.

Finally on the HDD it depends on the on-off switching you already mentioned, as well as the amount of data on the drive and whether it is SMR or CMR tech in the way it stores data.

My laptop was delivered with a 500GB nvme drive and I am considering replacing that with a 1 TB or 2 TB device to avoid the upcoming need for external storage. Even though I have had it for 3+ years it still is a very good laptop that I am not ready to replace yet.

Thanks you very much Scott I will check it .

How can I get more out of my HDD? that it enters a state of rest is already a limitation in performance.

The HDD spins up and down during data transfer? That isn’t normal. It should spindown after being idle for a while.

You could try the following guide to squeeze more performance out of your VM.

Again appreciate your time to explain the scenario.

At this time I was not referring to external HDDs, my laptop and I don’t know if yours also, came with 2 HDs, one of them 250GB SSD type and another of 1TB HDD.

And I was wondering what was the way to remove this sleep option.

I’ll do a little research.

The HDD spins up and down during data transfer?

Thank you for your time.

No, isn’t during the transfer data, is after that. So then he is starting and stopping and that generate spend of time.

I have a laptop with NVMe+HDD, my HDD spins down after 10 minutes of inactivity as I set it to do so. I think you should look into ATA APM or if that doesn’t work you can try tools that can set the timeout for your disk.

At this time I was not referring to external HDDs, my laptop and I don’t know if yours also, came with 2 HDs, one of them 250GB SSD type and another of 1TB HDD.

And I was wondering what was the way to remove this sleep option.

Mine came with only the NVME SSD drive, which was why I mentioned a possible update. I do see that the manual suggests there is another drive bay for a 2.5 inch drive, and if I use it I would put an SSD drive in that bay, not an HDD.

The gaming laptop is already power hungry enough that an HDD would only add to the power demand considerably. That is likely why yours is set to power down so often.

drive bay for a 2.5 inch drive, and if I use it I would put an SSD drive in that bay

That’s definitely a possibility. As far as value/reliability for your dollar, I recommend Crucial MX. Samsung are higher end, but frankly, with the SATA bottleneck vs NVMe, I doubt you’d realize any performance gains by investing in a more expensive one. YMMV, but Sandisk ones are generally cheaper, but I’ve seen them fail more prematurely than Crucial.

Amazon has a 2 TB NVME stick (crucial) for ~$ 170 right now and the samsung one is ~$ 200. Not a bad price for either one.
I might just replace the existing 500GB one and relocate that one into my desktop.